Just south of Sandwich, Illinois, Alan and JoAnn Adams, along with their son, Ross, his wife, Jessie, and their two children, work together to raise corn, soybeans, and cattle. Alan's grandchildren are the 7th generation to live on the family farm.

Focused on the Family

A seven-generation family farm, Adams Farms revels in its well-earned reputation for close family ties and a healthy volunteer spirit with a commitment to always do what’s best for their family and the beef industry.

Farming in the Adams family predates Chevrolet and the Civil War. More amazing yet is the fact that the family still owns and farms the land that was homesteaded by Alan Adams’ family in the 1840s. Farming is the family's way of life and it hss become their heritage as it’s passed down from generation to generation.

Alan studied agriculture at the University of Illinois and had the chance to come back to the farm after college. He was encouraged to invest in expanding the beef cattle operation due partly to his obvious enjoyment in raising cattle. The Adams family farm expanded again when Ross and Jessie came back to the farm in 2009, but not before Ross served his country in the U.S. Army.

After graduating from high school, Ross decided to join the military. He shipped out to Fort Benning, Ga., for U.S. Army Infantry School and enrolled in Airborne courses. He then became a U.S. Army Ranger and upon completion of his military training, Ross joined the 3rd U.S. Infantry, traditionally known as “The Old Guard,” which is the oldest active-duty infantry unit in the Army. The Old Guard is the Army’s official ceremonial unit in Washington, D.C.

After three years active duty, Ross chose to serve five years inactive reserve. During this time, he majored in and completed a degree in animal science at the University of Illinois and returned to work full-time on the farm.

While feeding cattle is in the Adams family's roots, it's also essential for allowing the next generation to return to the family farm. As the operation continues to grow and change, feeding cattle presents a great opportunity. The Chicago suburbs are less than 30 miles from the farm and land prices are fairly high; it’s not as difficult to expand with cattle by building state of the art feeding facilities that allow for focused animal health and nutrition plans along with greater care for the environment. 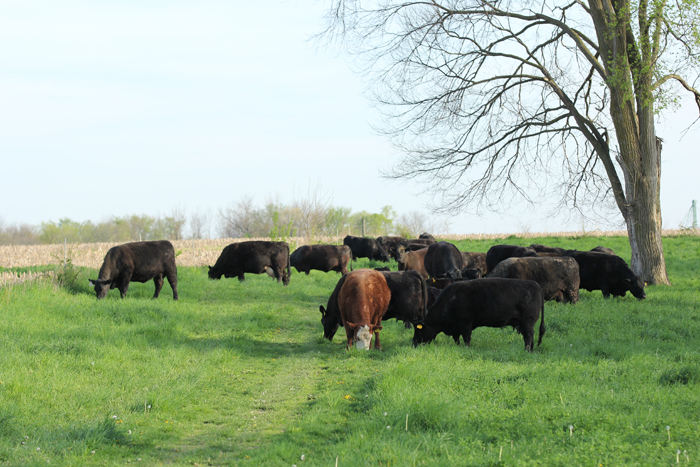 Some of the land that makes up the family farm is timber and not suitable for growing corn and soybeans. Thus, the perfect way to manage that land is raise cows and calves on the plentiful pastures the timber provides. Ross thoroughly enjoys raising cows and calves and this model also helps support the feedlot. Calves not retained as part of the herd enter the feedlot and are fed a balanced diet containing some of the crops the family grows.

One of Alan’s hopes for future generations on the farm is they learn to incorporate the latest advancements in science and technology, and incorporate them into the farm. As the Adams family operation continues to grow and change, the importance of family will always stay the same. You can bet with the foundations of family, the Adams’ nurture, and their ability to work together through any situation, the farm will continue to grow and prosper for years to come.

Come one come all to the adams family farm

The Adams Family hosts guests on their farm annually and enjoys showing people how cattle and crops are raised. This open-door policy stems from their belief that their farm is part of a community and it's important to be involved and show others how important agriculture is to the success of neighboring areas and the state. The number one way the Adams family supports their local communities is through  service. By working locally on their farm, each family member invests time in serving in our local churches, boards, and civic organizations. They are raising children in the area, so it is in their interest to invest financially as well as through their time.

In my perfect world, every fourth grader in the county could visit a farm.
- Alan Adams